How to get to Caterham Valley

Getting to Caterham Valley

Located in east Surrey, on the edge of the Surrey Hills and doorstep of London, Caterham is easily accessible wherever you’re travelling from and however you choose to travel. Caterham Valley town centre is well-served by public transport, with a train station and regular buses, there’s plenty of car parking around town, and pedestrians and cyclists will find it easy to get around too.

Direct trains from London Victoria to Caterham train station via East Croydon and Purley arrive approximately every half an hour throughout the day and more often at peak times when there are also trains from London Bridge. It is possible to connect with Caterham services from other lines by changing at East Croydon or Purley. Visit www.nationalrail.co.uk to plan your journey to Caterham Valley by train.

Caterham Valley town centre is less than five minutes’ drive from junction 6 of the M25 and is well connected to nearby towns. There is plenty of on-street parking on the main roads and side roads, and the two main car parks are located behind Morrisons off Harestone Valley Road and behind Waitrose off Croydon Road. 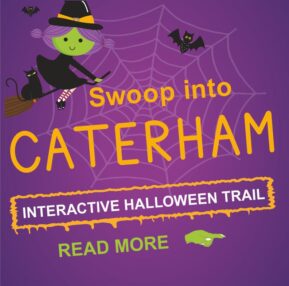 About the BID & Board

Our e-news is sent out approximately once a month – we will never bombard you. We will never share your data and you can unsubscribe at any time by clicking the ‘unsubscribe’ link at the bottom of our emails.